Derek runs a blog called 'The Positive Coeliac'. Read about his journey towards good health and a positive mindset after being diagnosed with coeliac disease. 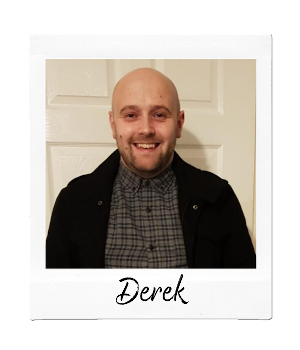 When did you get diagnosed with coeliac disease?

I got diagnosed with coeliac disease in September 2016. I had been really unwell for around 3 years before diagnosis. My symptoms started shortly after my daughter passed away when she was almost 5 weeks old in 2012, which as you can imagine this was very difficult and I believe had some kind of impact on my health.

My main symptoms were brain fog, fatigue, calcium, vitamin d and iron deficiency. I would also have some strange neurological symptoms such as pins and needles and a sensation that felt like warm water running in my muscles. I didn’t have the usual stomach troubles you would associate with coeliac disease until around December 2015.  I began to experience really bad flare ups with bloating, diarrhoea and ibs like symptoms. I felt like my stomach was shredding in the inside and was really uncomfortable. I linked this to stress at the time but when the GP put all my symptoms together he suggested being tested for the disease.

How did you feel about the diagnosis?

I must admit initially I was shocked at first and felt very fearful for my future health. I also got diagnosed with osteopenia due to the calcium deficiency. The blood test also detected immunoglobin deficiencies with complete deficiency in IGA and partial deficiency in IGG.  With all of this I felt like my world had come crashing down on me.

Once I got over the initial shock of all this I felt quite relieved and positive that I finally had an answer for my health problems and was glad that I could begin to improve my health and get started on the gluten free diet.


What was your relationship with food like before you were diagnosed with coeliac disease?

I did always enjoy food, I probably wasn’t as experimental as I am now and stuck to the same foods. I would say that my diet probably wasn’t the healthiest, I ate a lot of on the go food, ready meals and takeaways. I could never finish a meal though and would always leave a large portion as I felt so bloated. I did often feel I needed to go to the toilet immediately after eating. Coeliac disease has changed that for me and I have really opened my mind with food since starting on the gluten free diet. I like to have lots of variety in my diet and try new things.


Have you ever felt like you have “missed out” because of coeliac disease?

There are times that you feel a tinge of envy that you can’t eat the same food as everyone else.  The only time I feel like I miss out can be at functions or gatherings where there are buffets.  I find that often there is very little selection or due to cross contamination it is difficult to find something suitable to eat.  Also going out for a meal can be challenging if the restaurant doesn’t offer suitable options, I felt after diagnosis like I was being a bother to the staff and to those I was dining with.
At first it was difficult when going for a beer with friends as you maybe couldn’t have a beer or lager.  It’s something I have learned to live with now though and always find a substitute, or gluten free alternatives.


What helps you focus on the things that you can eat?

I started my blog as ‘The Positive Coeliac’ nearly two years ago alongside an Instagram profile, this really was the turning point for me and seeing all these great foods every day on my feed took away that feeling of exclusion and gave me a creativity with food and in life that I never had before.

I like to focus on the positives with food, yes it has been known that gluten free staples such as bread, rolls and pasta do taste different from the gluten full alternative. I find that these options are improving all the time and with an open mind you can definitely still enjoy a sandwich or toast as much as those not eating a gluten free diet.  There is great gluten free food out there, so it is important not to think a diagnosis and being placed on a gluten free diet means that you can no longer enjoy food the same. Gluten free foods have progressed so much with choice and variety in supermarkets, Coeliac UK accreditation in restaurants and quality.


Did you notice a difference in mood and health after sticking to a gluten free diet?

I didn’t immediately feel better after going on the gluten free diet. It did take almost two years to feel a major difference in my health and mood. I have always been quite a positive person but I did struggle for a while at first after diagnosis in mood and could get quite down at times. I have energy again, the brain fog has lifted and my stomach feels normal again. Don’t get me wrong - there are times that the dodgy tummy can return and it is hard to tell whether it is coeliac related or if it is just general illness. As a father of two kids it can feel difficult to determine if fatigue at times is also related or just due to being on the go so much.  Overall I feel the best I have in a long time and I’m glad I got a diagnosis while young to help my health in the future.


What’s your favourite Juvela product and what do you like to make with it?

I love the Juvela White Mix. The Mix is great and so handy to make everything from fairy cakes to bread. I like to keep things simple when I bake so the Juvela basic sponge cake is my recipe of choice. I find it brings a greater consistency, rise and quality to some shop bought cakes. I often make this for special occasions (usually my own birthday or Christmas) and the fairy cakes it makes are also amazing and usually brings the “you wouldn’t know they were gluten free” comment.


And finally, what’s your top tip for staying positive?

My top tip(s) would be to face coeliac disease diagnosis or the gluten free diet with a positive mind. Open up your mind to new ideas, food and a new way of life. Be creative, experiment and don’t get down with a diagnosis. Look at it as if you have been given a chance to improve your health, it is difficult at first but join the communities on social media, ask Coeliac UK for advice and try great brands such as Juvela that make great quality products for those eating on the gluten free diet.  There is lots of support out there and you will get used to this new way of living.

Find out more about obtaining Juvela gluten free food on prescription in the UK.

END_OF_DOCUMENT_TOKEN_TO_BE_REPLACED

We use cookies to give you the best possible experience on our website. We’ll assume that you’re happy to receive them unless you let us know otherwise. More Info